"Foreign, Fetishized, Fever!" in Yellow Book: A Project by He Xiangyu

"Queer Faces, Unsafe Spaces" in Women and Inequality in the 21st Century

"Love is Colorblind" in Sociology of Race and Ethnicity 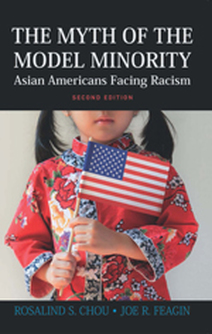 The second edition of this popular book adds important new research on how racial stereotyping is gendered and sexualized. New interviews show that Asian American men feel emasculated in America’s male hierarchy. Women recount their experiences of being exoticized, subtly and otherwise, as sexual objects. The new data reveal how race, gender, and sexuality intersect in the lives of Asian Americans. The text retains all the features of the renowned first edition, which offered the first in-depth exploration of how Asian Americans experience and cope with everyday racism. The book depicts the “double consciousness” of many Asian Americans—experiencing racism but feeling the pressures to conform to popular images of their group as America’s highly achieving “model minority.”

FEATURES OF THE SECOND EDITION 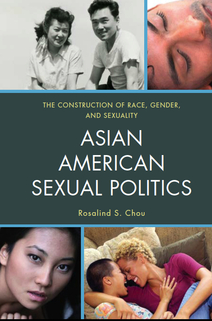 Why should we study Asian Americans Sexual Politics? This book explores the socio-political dimensions of beauty, self-esteem, and sexual attraction among Asian Americans. By evaluating constructions of Asian American gender and sexuality, it informs us on how racism, specifically white supremacy, works in the United States. The externally imposed meanings placed upon Asian and Asian American bodies unveils the new racism in this supposed “post-racial” United States. The goal of this book is to not only share the experiences of my more than sixty respondents, but to continue the dialogue that other scholars have already begun about the intersection of race, ethnicity, gender, and sexuality. Social forces shape our lives. Ideas are normalized about our identities that may influence our thoughts, feelings, and actions. To progress racially in the United States, we must recognize the role of power, privilege and see white hegemonic masculinity in its various forms and the way it shapes how we see the world. As a result of normalized hegemonic ideology, we can fail to deconstruct our world, motivations, preferences, and “choices.” My Asian American respondents see the world through “frames.” They can be “multi-framers” who possess ideology from a “white racial frame,” and simultaneously draw from “counter-frames” that are in conflict with each other. Individuals make sense of their world through these frames and are either shaped by white social structure or at odds with oppressive powers. This book explores how racism affects Asian American body image, self-esteem, and influences our most intimate relationships.

While a vibrant theoretical literature exists on the intersectionality of race, gender, and sexuality, little has been written about how individuals encounter and reflect on the connection between these forms of difference. Rosalind Chou's provocative study fills this void. Drawing upon the lived experiences of her Asian American respondents, she demonstrates the persistence of white hegemonic notions of race, femininity, and masculinity, and the difficulty of developing 'counter frames' to oppressive discourses. -- Michael Omi, University of California, Berkeley

The Myth of the Model Minority: Asian Americans Facing Racism (2008) 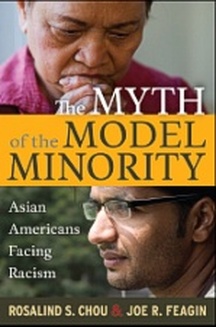 In this pathbreaking book sociologists Rosalind Chou and Joe Feagin examine, for the first time in depth, racial stereotyping and discrimination daily faced by Asian Americans long viewed by whites as the model minority. Drawing on more than 40 field interviews across the country, they examine the everyday lives of Asian Americans in numerous different national origin groups. Their data contrast sharply with white-honed, especially media, depictions of racially untroubled Asian American success. Many hypocritical whites make sure that Asian Americans know their racially inferior place in U.S. society so that Asian people live lives constantly oppressed and stressed by white racism. The authors explore numerous instances of white-imposed discrimination faced by Asian Americans in a variety of settings, from elementary schools to college settings, to employment, to restaurants and other public accommodations. The responses of Asian Americans to the U.S. racial hierarchy and its rationalizing racist framing are traced with some Asian Americans choosing to conform aggressively to whiteness and others choosing to resist actively the imposition of the U.S. brand of anti-Asian oppression. This book destroys any naive notion that Asian Americans are universally favored by whites and have an easy time adapting to life in this still racist society.

Most Americans believe Asian Americans are content, do not suffer from discrimination, and are all in the path to whiteness. Chou and Feagin document convincingly with interview data that they are not content, suffer from discrimination, and are, for the most part, regarded as perpetual foreigners. Bravo to the authors for bringing to the fore the racial oppression endured by Asian Americans! --Eduardo Bonilla-Silva, Duke University

Through a compelling analysis of white racism experienced by Asian Americans in their everyday lives, Chou and Feagin offer an insightful critique of research on assimilation that focuses on indicators of integration while ignoring the serious forms of racism examined in this book. --Leland T. Saito, University of Southern California

This landmark work covers new research ground in documenting the significant yet unrecognized barriers of discrimination and marginalization faced by Asian Americans in the United States today. As an often invisible and silent minority, Asian Americans can at last find voice in this brilliant work that recognizes the reality of their experience. The courage, nobility, and honesty of the authors will assist all involved in the struggle for equity and inclusion. --Edna B. Chun, Broward Community College